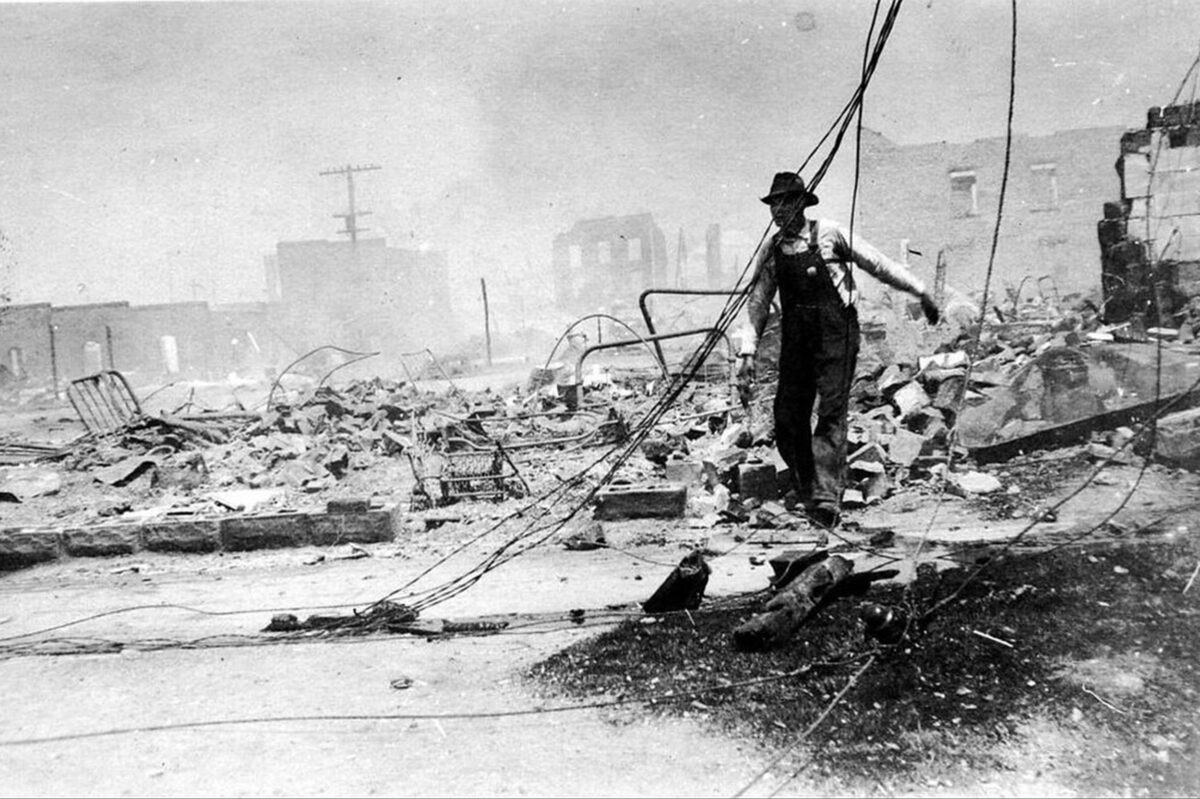 A century ago, June 1st, 1921, the wealthiest U.S. Black community of its time was burned to the ground, leaving in its wake thousands of Black homeowners and businesses destroyed with nothing but death and despair as a result of their desire for self-reliance, dignity and financial independence.   The Greenwood District of Tulsa Oklahoma, a vibrant, meaningful and prosperous Black community of law-abiding citizens, in forced segregation, lost everything they worked for in a matter of hours.  Nothing was sacred during the 35 square block race massacres.  Black churches, hospitals and public schools were burned and looted along with the homes and businesses of a proud but woefully victimized people in the “Jim Crow” south.  The American Red Cross estimated death tolls at 300 and even more wounded but no records were ever accounted, and no criminal actions ever taken.

Today, this national atrocity remains the most under reported and under-documented act of self-inflicted, domestic terrorism this country has ever known.   The true circumstances of the event are not widely taught in our public schools or institutions of higher learning. With research, limited mentions can be found in 1921 periodicals where the event is portrayed with duplicity and misleading headlines. It was referred to as “The Tulsa Race Riots” with assaults being perpetrated by people on both sides.

Nothing could be further from the truth and reminds me of the tone deaf political rhetoric awkwardly articulated by President Trump in 2017 when he referenced the Charlottesville Confederate statue protesters vs. Neo Nazi torch carrying demonstrators as having “...very fine people on both sides”.

Fortunately, the centennial anniversary has provided some needed momentum to publicize, educate and document this small but historically significant land in Tulsa Oklahoma called Greenwood.   A small swath of God’s earth, purchased, cultivated and nurtured by former slaves in the pursuit of happiness. Unfortunately, it was a promise by the constitution of an idea, but never manifested in the constitution of man.

Far from the “Shinning City Upon A Hill” vision of America that President Reagan regaled in his 1989 Farewell Address to the Nation, the city of Tulsa remained a dark shadow, a stain that we’d rather ignore. Fortunately, progress is being made. This first centennial observance embodies years of working through past pains which eventually lead to the founding of The Tulsa Museum in the late 1990s.  Now, among other things, a digital collection of photographs can be seen online.  Recently, Tulsa City officials have begun limited excavations of unmarked mass graves while various groups and independent litigants file for legal reparations.

A Challenge for Us All

Today, Greenwood is but a mere shadow of its former self.  The financial and intellectual legacy that could have been… is all but loss. There are many reasons for that, including desegregation in the 1960’s and the opportunities that came with time, government intervention and the slow progression of societal norms.

That said, there is more to this story of legacy loss.  We need to bring light to the dark space that was left in the hearts and minds of most Americans, happy with capitalism but haunted by a culture that too often supports and conceals financial and human injustice.

For those who have benefited from the labor of ancestors, let’s plan for legacies in pursuit of generational wealth and prosperity.  I’m not just talking financial wealth, but human and intellectual capital that exists in every family.  A financial or legal professional can walk you through the options to protect the legacies that weren’t afforded our ancestors 100 years ago.

Plan for 2021 and beyond as if lives depend on it.  Because it does!

It’s Your Life…Plan for it.